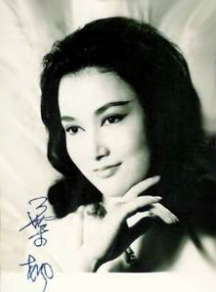 Julie Ye was born Wang Jiu-ling 王玖玲 in Hankou, China. She came from a crop of very talented and glamorous female actresses who dominated HK Cinema from late 50s thru 60s. She earned the nickname “Sister Long Legs” after her 1960 movie with the same title 長腿姐姐. Her stunning physique and sultry reputation (something sometimes known as “innate sex appeal”) would cause to distract but she captivated a generation of fans with the many memorable musical movie scenes as she sang with an alluring silky and magnetic voice. Some of her more popular songs are 晚霞 (Sunset), 歌迷小姐 (Miss Songbird), 我有个好家庭 (I have a happy family) and 唱不完的他 (Endless love). Pathe (EMI-HK) released a CD of her popular songs (The Series 34 – 神秘女郎) in 2007.