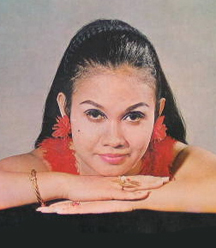 Diah’s real name is Diah Komalawati Alexander. She was born in Jakarta. She grew up under the musical guidance of her father “Iskandar”, a very popular jazz musician and composer. In 1962 and barely in ninth grade, she was encouraged to sing at a birthday party. The crowd loved her and promptly dubbed her as the “Connie Francis of Indonesia”. A music career was born. She recorded her first album in 1963, and quickly rose on a path to stardom. She abruptly “disappeared” after marrying at age 25 in 1972. In later years (1980), she reemerged as the TV host and producer of Orkes Chandra Kirana, partly as a tribute to her late father who was untiring in his efforts to encourage appreciation of the classic, jazz and orchestral music among Indonesian youth. The show became one of the national public’s music program favorites with 12 years running.