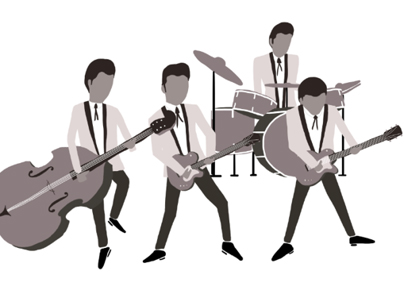 The Timor Rhythm Brothers (Andy – lead guitar, Reggy – guitar/banjo, Ponthon – double bass, Loulou – drums) with sister Jane (vocalist) was a family band from Surabaya, Indonesia. They repatriated to Holland in 1957. They started calling themselves The Four Tielman Brothers or The 4 T’s  and quickly became popular enough to be invited to play at Brussels World Fair of 1958. They captivated an audience with their ­­exciting stage antics (described as “Andy played guitar with his foot, the guitars were played reverse in the neck, his guitar was played with the drumsticks of Loulou, the double bass was handled in a sheer acrobatic way and guitars were tossed between the brothers”). They signed with Fernap label and recorded “Rock Little Baby of Mine” and “You’re Still the One.” By the end of 1958, they were invited to play on Germany TV and in the movie “Paprika” and later recorded a single with Boverma label (“Record Hop” and “Swing It Up”). The band now named The Tielman Brother had started to play a new genre later to be called Indorock, a fusion of Indonesian and western rock ‘n roll. By 1960, they went back to studio and recorded “My Maria” which became their most requested song ever. An LP “Tielman On Stage” appeared in 1961 with the instrumental “Night Train”. They then recorded several singles with Ariola label including “Tahiti Jungle” and “Java Guitars”. Jane started to appear more often with her famous brother on tours in the early 60’s. In 1963, Andy and Reggy were involved in a bad car accident. Reggy recovered quickly but Andy’s rehabilitation took several months. In 1967, “Little Bird” was recorded which reached no. 7 on Dutch Top Forty. In the late 1970’s, An­­­dy abruptly reclused to the jungles of Kalimantan to live among the indigenous tribe, the Dayaks, for over two years. With the support of Carmen, a fan who sought him out and would be his wife later, Andy returned to the “civilized” world and restarted his music odyssey. In later years, the Tielman Brothers would move to Australia. In 2006, Queen Beatrix of the Netherlands awarded Andy Tielman with Star of the Order of Orange Nassau Services. The Tielmans were remembered as the legendary Dutch East Indies (Indonesian) band, one of the pioneers of rock ‘n roll music scene in the Netherlands and was at the forefront of the Indorock phenomenon. They were documented in the movie “Rockin Ramona”.

This entry was posted on Sunday, September 3rd, 2017 at 6:52 pm and is filed under The Tielman Brothers. You can follow any responses to this entry through the RSS 2.0 feed. You can leave a response, or trackback from your own site.